Today we've released an update to NChart3D, version 2.15. First things first, we have implemented support of ARM64 for Android version of our charting framework. That means, NChart3D is ready for deadlines announced by Google and so are the apps of our customers! The framework still supports the 32-bit apps, of course.

We are always happy to implement the wishes and requirements of our users. This time we have added gradient legend along with some other improvements. Gradient legend looks mesmerizing, but it also clearly shows the data distribution by the color palette (See the picture below). 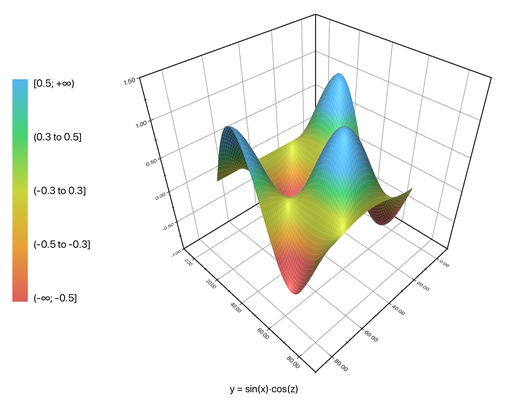 As for the other implemented requests, those include improvements for value axis caption and column series. Thus, there are now an API to set the thickness of columns in chart coordinates, an API to snap the columns' bottom to the axis minimum rather than to zero, and an API to flip value axis caption. Finally, we've fixed some minor bugs to make NChart3D even better.

We also need to announce the deprecation of labelsAlignment property of value axis. This property is now useless, because the labels are aligned automatically.

As is customary, here is a full changelog of NChart3D 2.15:
- NChart3D for Android: support of ARM64;
- Gradient legend;
- Column series improvements:
- API to set thickness of columns in chart coordinates;
- API snap the columns' bottom to the axis minimum rather than to zero;
- API to flip value axis caption;
- Minor bugfixes;
- Deprecation of labelsAlignment property of value axis.

NChart3D is available for most major platforms. Several licensing models are offered for purchase starting at $499. The trial version is free for 30 days. NChart3D 2.15 is already available on our website.